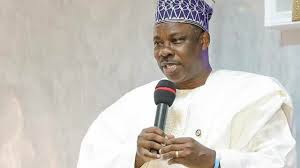 The Ogun State Governor, Senator Ibikunle Amosun had put smiles on the faces of civil and public servants of the state by clearing all outstanding deductions owed in the past three years.

Amosun who disclosed this good news to the state’s workforce on Wednesday at the 2019 Workers Day celebration held at the M.K.O Abiola International stadium, Kuto, Abeokuta said this is a promise made, and promise kept.

The worker friendly Governor who had on several occasions promised not to owe any worker their emoluments said, “alerts of deductions would start entering as from today, May 2, 2019”, saying he has approved and released a sum of N10.8bn to clear all salary deductions.

“In addition to the release of the salary deductions, we would also pay full April salaries with a sum of N9.4bn to make a total of N20.2bn”, Amosun disclosed.

Amosun further disclosed that all leave bonuses would be fully paid from next week adding that gratuities of retirees would also be cleared by his government till May 2017 within the confine of the law.

Speaking on the contributory pension scheme, he said, “it is truly a beautiful program but was wrongly implemented”, because according to him, “there ought to be a sinking fund for it to be successful which was never on ground”.

The governor used the avenue to announce the recruitment of 1000 staff who sat for the Administrative Staff College of Nigeria (ASCON) examination adding that the promotion letters of workers had been approved and released.

Amosun called on labour unions and workers in the state to keep the flag flying while reiterating his administration’s commitment not to leave any project uncompleted revealing that the contractors working on some major projects would be fully paid before he leaves so as not to have any abandoned project.

Answering newsmen on whether the Governor Amosun will implement the N30,000 minimum wage before leaving office, the Commissioner for Finance in the state, Mr. Wale Osinowo said, “the national salaries and wages commission will still come out with a circular to all states on staff emoluments and immediate we have it from them, we would work on it”.

The Chairman of Nigeria Labour Congress in Ogun State, Comrade Emmanuel Bankole while reacting to the gesture of the governor in an interview said, “this is a welcome development and when paid, it will have great effect on the economy of the state as workers would engage in buying and selling”.

On his part, the Chairman of the Trade Union Congress in the state, Comrade Bunmi Fajobi said, “we are very happy receiving the news, the Governor did not disappoint us”.